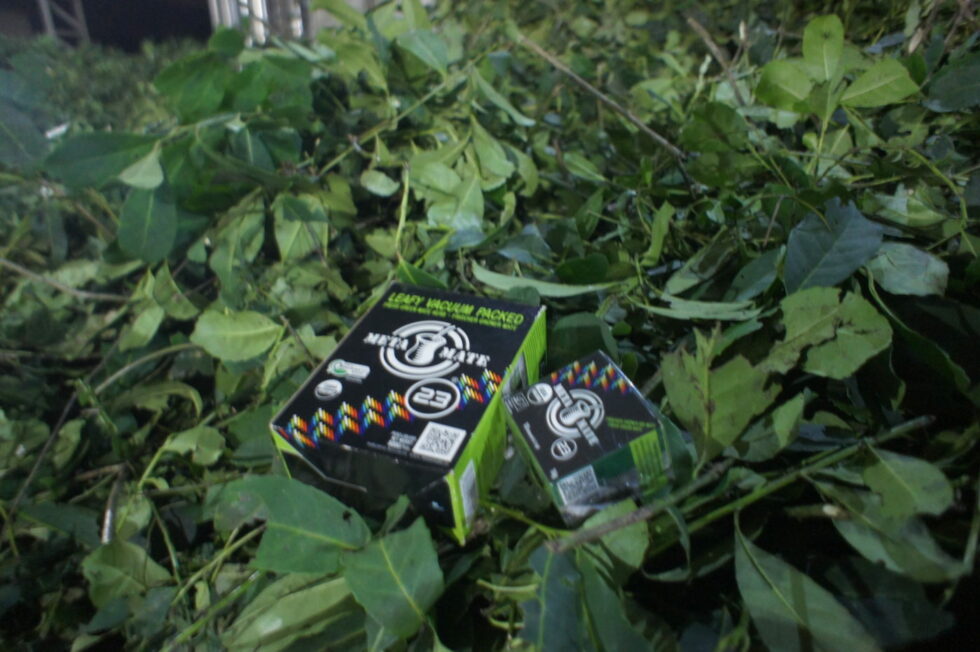 In the Mate world, it is a well known fact that the best leaves come from the forest in Parana. In former times, before Argenntina produced mate, leaves from Parana were shipped down the River Iguacu to Argentina and Uruguay.

Barao always sourced its premium Mate from this region and following our visit in 2017 to the region it was possible to certify one of their producers in the area so that we could officially source our organic certified 23 Mate from the native Mate forests in Pinhao, Parana.

The Meta Difference – 23 might be our mate for the mass market, yet even in its production, Meta Mate teamed up with the best – Barao – renowned for their freshness and the leaves are sourced from some of the most pristine mate forests that exist.

Driving through the Parana mountains for hours on end, a sea of green is all that meets the eyes; A roof of Arucaria and pines is what mostly dominate the view, providing shelter to the mate that grows underneath protected by the shade of these enorumous trees. There is no way that this mate (certified or not) cannot be organic, and it is anything but plantation Mate.

While most of the native forests in Rio Grande do Sul have unfortuantely succumbed to the Soya industry, Parana is pristine in comparison. However one does notice monocultural planations of trees in the midst of the forest. Deforesatoin is disguised in regions as densification with quick growing pine trees which are then harvested for wood (along with the rest of the native trees).

Sr. Antonio Mendez who stems from the region of Pinhao (which takes its name from the pine nuts harvested from the Araucaria trees), has worked with mate all his life. He sees the value of the biodiversity in his region, and notes that the more he cares for his forests the more mate he is able to harvest from there. Today he owns 700 hectares of primeval forest where Meta Mate 23 is sourced from.

Sr. Mendez is proud of the quality of his leaves and anxious to take us through his forests to show us the mate trees that grow within a meter of each other on all sides. He explains to us, that if the forest is freed from vines and other weeds more mate trees naturally grow. The close proximity to each other makes it easy to collect many leaves in a small area.

The Mate trees are trimmed to about 2 meters in height with sufficient green being left to grow again. Once harvested, a piece of forest is not touched for 2 years.

Collection takes places througout the year, and approximately 15000 kg of mate leaves are harvested per week (on average) . Mendez contracts ‚Tareferos‘ independent mate harvesters who go around from one region of the forest to the other to harvest the leaf. Usually a group of 5-10 men camp out in an area (where rustical boarding and food is provided) and spend 5 days collecting leaves. After a weeks worth of work they often go home for a few days and then return to harvest again.

The tareferas are paid per kg that they collect, so the are free to work as much as they want to per day. Their names are etched onto the bamboo vines that hold together the balls of mate that are brought to the clearing at the end of the day which are piced up by a tractor at the end of the day.

Once they are done with collecting, the tareferas gather around the fire to drink mate, grill meat, play cards and have a good time together.

Cultural context has to be taken into account when referring to the wages and working conditions of the tareferas. When we arrived at the camp with Sr. Mendez he was greated warmly by the tareferas who enjoy the untame life in the parana prairies.

Once they are done with collecting, the tareferas gather around the fire to drink mate, grill meat, play cards and have a good time together.

Author’s note: Revering the Gaucho culture of freedom and life in the pampa, we recognize those traces in the men who prefer this lifestyle instead of the comforts of wage and routines of a city life