Purinox – a tale of friendship and fun… 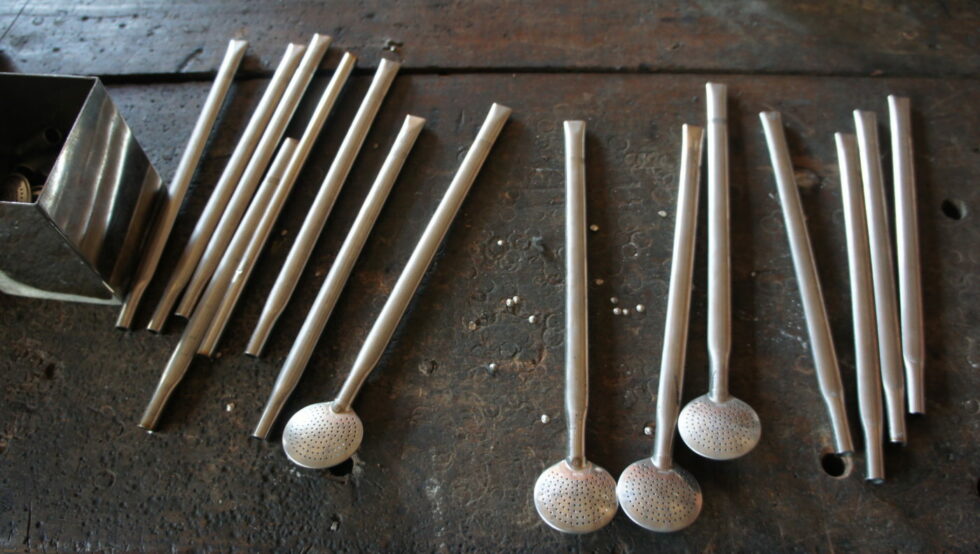 Years ago during an annual production trip to Brasil we were recommended by our partners Barao de Cotegipe to visit a local bomba production facility next door. Meta Mate founder Fabricio followed Sergio Picolo’s advise and paid a visit to PurInox and was impressed with what he saw.

In April 2009, Sidney Wilk who had been working at a bomba factory for 14 years decided to buy the company together with his friend Joao Paulo and they took over the bomba production at Purinox. For the first 8 years, the two together with Joao Paulo’s brother and another friend worked out of a small production facility in Barao concentrating on building up their business by producing high quality innovative bombas.

Some years later they branched out into producing knives as well.

Together with Purinox we found partners who were committed to innovation and quality. Their company size (4 people in the beginning) gave them the flexibility to try out new methods in bomba production.

Our line of Premium Bombas produced by Purinox are unique in that they are fused together using electric pulses and heat as opposed to a standard soldering with lead or silver (which releases Cadium into the product). All soldering work is done with 340 inox so that the bomba does not need ot be washed in sulpheric acid afterwards (which is necessary when working with silver soldering.

When Meta Mate had special wishes to produce our designer range of butterfly and dragonfly bombas, Purinox was ready to give this a try with us. One might notice that these bombas are heavier than the normal bomba and it is because the tubes used in Purinox Premium Bombas are thicker than the standard inox tubes to resist the uniquely crafted bulbs (filter piece)

The Bomba Serejo, a sleek straw with slits at the bottom is a co-creation where we are trying together ot adapt this better for the European market so that leaves do not enter into the the bomba. The unique thing of this bomba is that it is only one piece.

In early 2018, Purinox slowly started to shift produciton facilities form Barao de Cotegipe to Entre Tres Rios. The municipality of Entre Tres Rios offered Purinox a lot of support in the hopes that it would generate an income for the area. A year and a half later, Purinox has grown to a small company with 11 employees (out of which 8 are from the region).

The four original founders chose to move into a house together (because they enjoy each others company and in order to economize on costs) and when they are not at work they enjoy fishing and grilling together.

There is no sense of heirarchy at Purinox, the owners and employees work together side by side producing bombas and knives. And although they have been steadily growing since they started (they do not have to worry about sales, everything they produce is sold), their focus is on quality not on quantity. The knives that Purinox produce are sold at exclusive stores in Porto Alegre and their bombas are praised by mate drinkers from Finland to the USA. Infact, intitially before some of their bombas like the Butterfly Bomba were availaible in the Brasilian market, Gauchos who visited Berlin used to buy them abroad to bring back home!

We recently visited their new factory Entre Tres Rios (an idyllic town situated near a dam constructed 50 years ago and the owners proudly showed us around.

This machine to cut and shape pieces facilitates the bomba production. In the past everything had to be cut by hand.

When fusing the filter together using electricity liquid argon is also applied to the bomba bulb to prevent it form oxidizing.

Protective masks and clothes are required due to the UV emissions in this process.

The bulb and tube are soldered together using inox or pressed together with an electric pulse.

After this the bomba is taken for polishing.

The polishing is done using natural fat and clay

and two rotating brushes (one made out of a fibre grown in the north east called Seesal to remove the scratches and one of cotton to polish the surface.

Bomba rods are thicker than the average ones

A collection of bolts and tubes that an apprentice was practicing to put together. Nothing goes to waste, all damaged pieces are melted and reused.