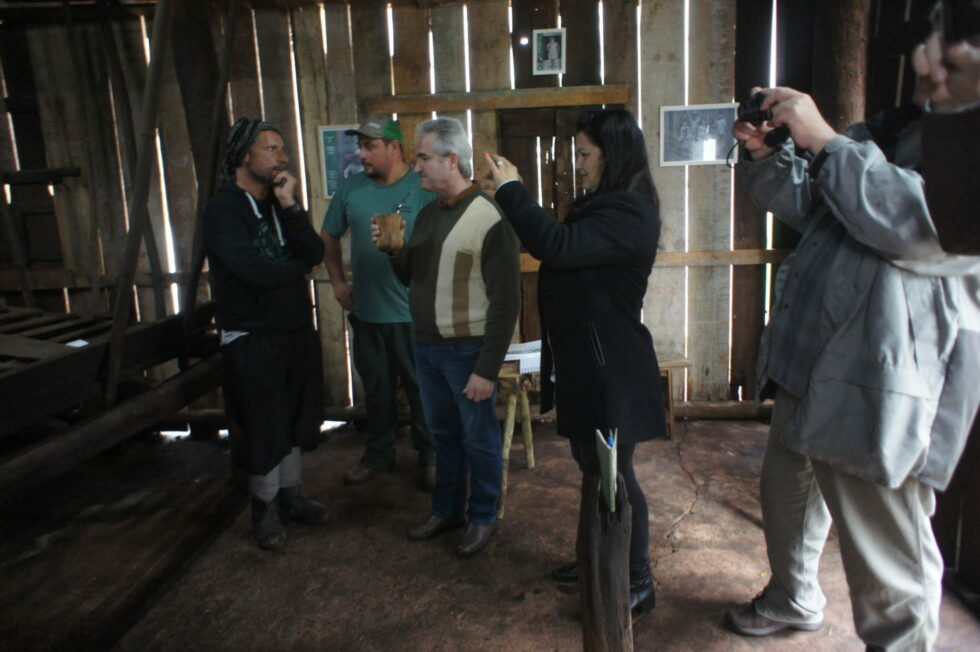 The old barbaqua from the Family Gehm has been used for the past 40 years to dry Mate, yet pieces of it date back to the early 1900`s from Salete Gehm’s grandfather’s mate production. This is a very rare construction, as most old barbaquas were burnt down as the art of hand-drying mate was made obsolete. The celebration on June 14th 2019 marked the inauguration of a museum on this premises

With the legalisation of the Barbaqua of the Family Gehm, we have entered a new era in the art of craft mate production in Brazil where a precedent has now been set to honour this heritage.

Although a picture can portray a thousand words and words can tell a beautiful story it is hard to capture the emotions of an event when you are witnessing history in the making. (Meeting of Mates, Fabricio of Meta Mate with Sergio of Barao and Salete and Vilsom Gehm, all mate makers of different degrees)

As the rain poured down creating clay from the red earth in one of the oldest mate capitals of the region, friends gathered on the property of the Family Gehm, to honor a momentous occasion for this family who have been producing mate continuously for the past 123 years.

The handwork from Ticiano and Tiago Gehm were praised highly form all for their finesse in all aspects from constructing the new infrastructure to the way they cut the trees and last but not least for the mate that they made.

The new barbaqua being unveiled, the full construction was made by the Gehm brothers (based on Ricardo Lorenz’s design) constructed out of wood planted by their father

Juan ‚Toto‘ Hedman, friend and advisor form INYM who has been accompanying this process from the beginning came all the way from Argentina for the afternoon and he brought his favourite mate to share.

Ticiano and Tiago’s craft work were highly praised by all who were present.

Local Energy supplier Creluz was present to share a video that they had made documenting the production of the Family Gehm.

And no traditional gathering would be complete without a churrasco…

In the words of Ricardo….According to the legend… Yari received Caa from Tupa. Mate is not a religion but makes connections. This leaf born in the forest offers a life of abundance
Thank you to the forest and to all of those who made this mate mission possible.