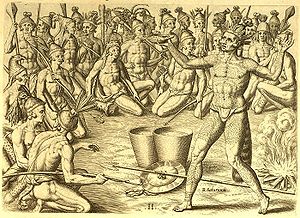 A German Gaucho is inspired from his grandfather to make Ilex Paraguariensis as craft:

Growing up with Mate, Ricardo started to produce craft Mate do Alemao (German Mate) in 2005 as a hobby in homenage to his grandfather on his ancesteral property which contained several hectares of native Mate forests.
He is responsbile for overseeing Meta Mate’s integrity and growth in Brasil and keeps us rooted to the original goals of reforestation and preservation of craft production

The Linha Lorenz is where the first Meta Mate harvests took place in 2009 and where we started with reforestation with the support of Club Mate. A Gaucho Brasileiro, Fabricio, goes to live in Germany and gets inspired by the German Gaucho, Ricardo.  He meets a Paraguayan Gaucho, Derek,  living in Texas, who drinks craft Meta Mate, and gets inspired  to apply the Guarani mate making skills from Meta Mate to process the North American native Yaupon .

It is born the first Yaupon Meta Mate Craft

More about it on a 5 min audio. Please request it at Meta Mate Whatsapp at 00 49 152 338 155 47 . Order the first trial, and come into the waiting list of the back order. It is free post in Europe and we will make it possible with a back order list in the usa. THe price is simbolic and we aim to have same price and conditions than meta mate craft. Sapeco of Yaupon on guarani style